November 04, 2015
When the invite for the Press launch of The Pint Shop's new Autumn menu landed in my inbox I didn't hesitate to accept even for a second. A stalwart of the Cambridge food scene for the last two years, The Pint Shop single handedly rescued my faith in local food. After several bad experiences since our move from London I'd resorted to thinking we'd just have to drive the hour down to London if we wanted to eat out, there was no way I was taking any more expensive risks. That was until we discovered The Pint Shop. Thankfully the husband was taken to eat there with work, came home raving about it so next time we were out we headed there.  I wasn't at all disappointed from the delicious, reasonably priced cocktails to the delicious food it was wonderful. At the risk of sounding like a terrible London food snob (I apologise for that!) it was like being back in the big smoke, reliable good food and drinks with excellent service. 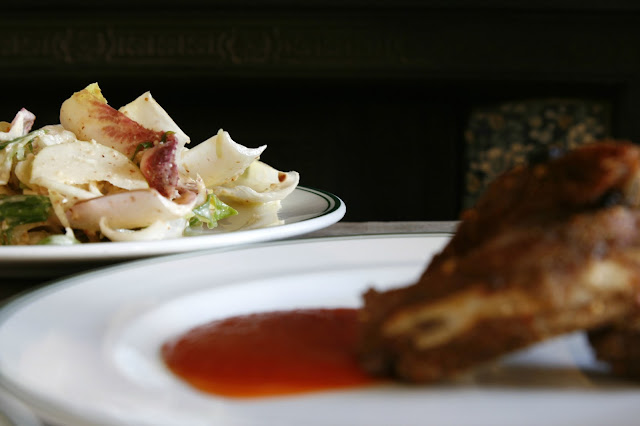 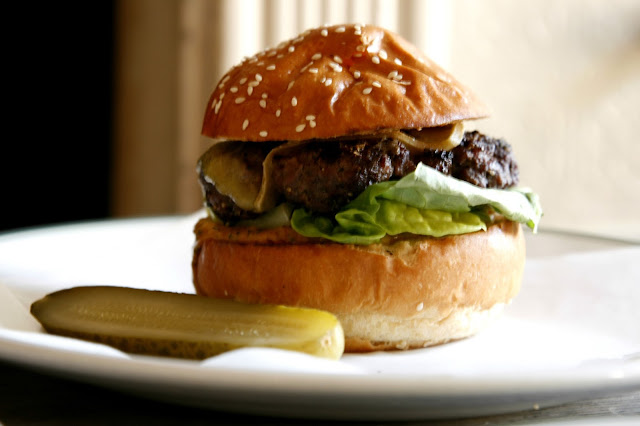 Their new menu released in time to make use of the local Autumnal produce is the brainchild of Rosie Sykes. Best known for being part of the team that rescued Cambridge Institution Fitzbillies, where she is Head Chef. Rosie has had her own cookbook published The Kitchen Revolution and also writes for the Guardian. Approachable yet clearly passionate about food it was fascinating to listen to the challenges she faced in developing a menu from scratch that was outside of her comfort zone. 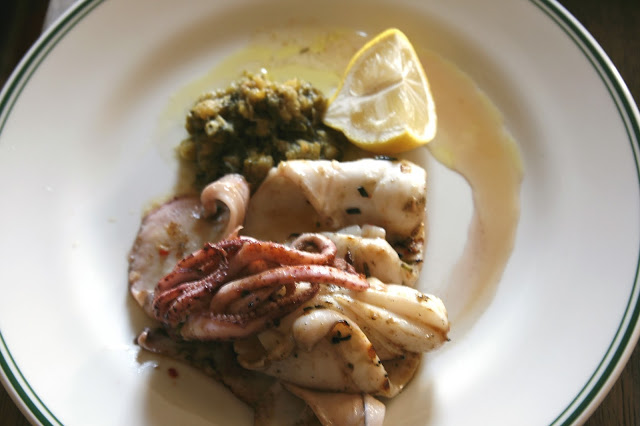 The Pintshop began life after friends Ben and Rich who met whilst working for Leon decided they wanted to go it alone. If you don't know Leon they were the people who revolutionised fast food in London by proving that healthy food could be prepared and delivered in record time. Fast food no longer the domain of Mr Ronald Macdonald, Leon set the trend and are now present across the capital and it's airports with plans afoot to expand nationwide.

Originally from Cambridge they recognised there was a lack of reasonably priced attractive places in the city centre to have a snack and drink if you weren't up for a full dinner. Their masculine approach to a meat heavy menu and a vast array of beers proved a winning formula, not ony with men I might add! Recognising trends in food are changing they decided to lighten' up the menu to appeal to a wider audience including families, open all day they recognised the need to develop their reputation for somewhere that children would also be welcomed for lunch. Their new more extensive children's menu will launch in January, though don't let that put you off if you have kids, as there is plenty on the current menu that I know my daughter would devour. 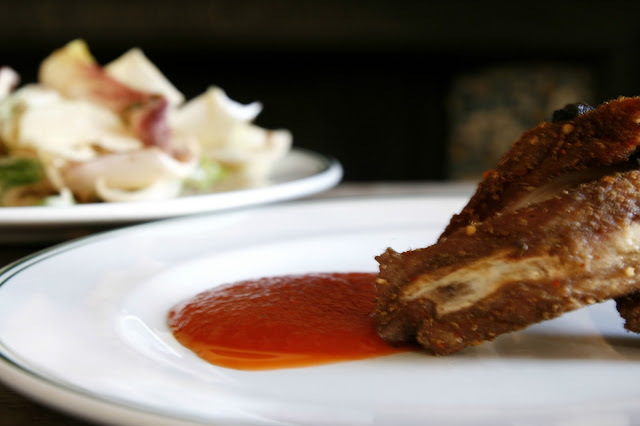 We kicked off with a selection of starters, all mouthwateringly good. The Southern Fried Rabbit is not to be missed, succulent which is surprising as rabbit can be dry, it's not often you see Rabbit on a menu and to be honest I'm of the Watership Down generation that didn't eat rabbit until recently. I can safely claim to be a convert these days especially after trying this. I also particularly loved the creamy, crunchy fresh Pear, fennel and chicory salad dressed in smoked almond. A wonderful clean and wholesome Autumn salad. A huge fan of sweetcorn fritters these are perfection served alongside a lovely potted crab.

The crispy Deep fried ribs are also very special indeed. Dipped in a fruit sauce with a chilli kick, they are juicy and full of meat. Heaven on a plate. 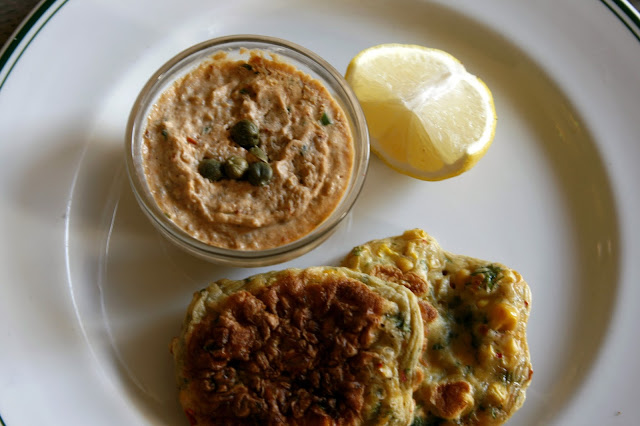 Onto the mains, astonishingly clever combinations. The Venison Haunch for me was pretty extraordinary, melt in the mouth tender with a strong mushroom sauce which enhanced rather than overpowered the meat. The light crunchy parsley topping contrasting with the richness of the dish. Equally fantastic and possibly my favourite was the Devilled Lamb Shoulder Kebab, a more sophisticated version of your typical Turkish kebab. The lamb is slow cooked over night followed by a burst on the charcoal grill before it reaches your plate where the juices run into the salad and the delicately spiced chilli sauce. Oh this was so good. 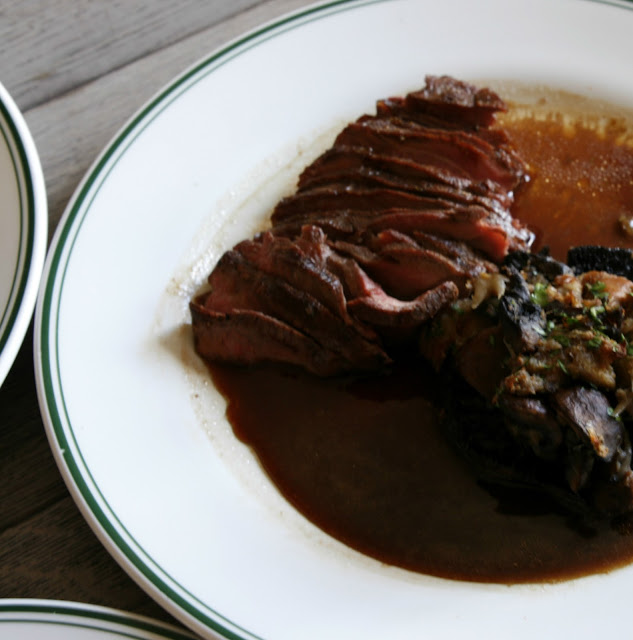 Decidedly full from trying so many dishes I forced myself to squeeze a mouthful of the puddings. For me the winning one was the Blackberry and pepper sorbet doused in gin, refreshing yet with an almighty kick to it it is a splendid way to end a meal. The ice creams at the Pint Shop are all handmade by the fabulous Jack's Gelato who you can often see riding around Cambridge. Equally divine were the Malt Teaser and the unique Tea and Toast composed of marmalade Ice cream, a delicate earl grey cream and toasted tea cakes. Need I say more? 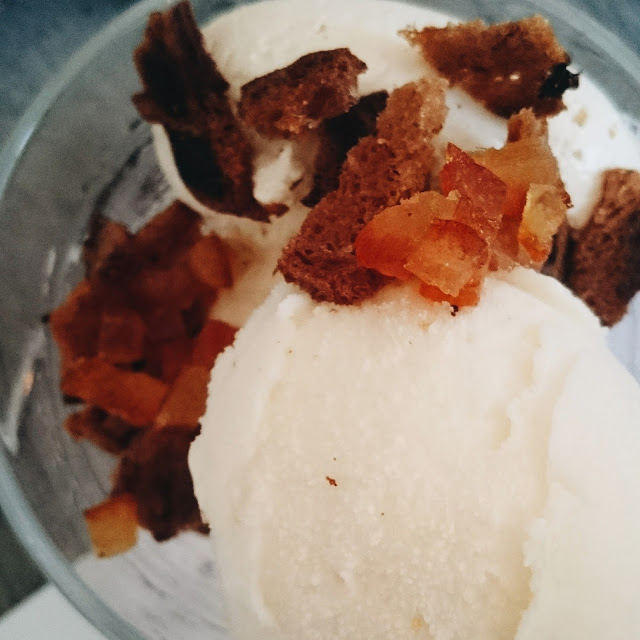 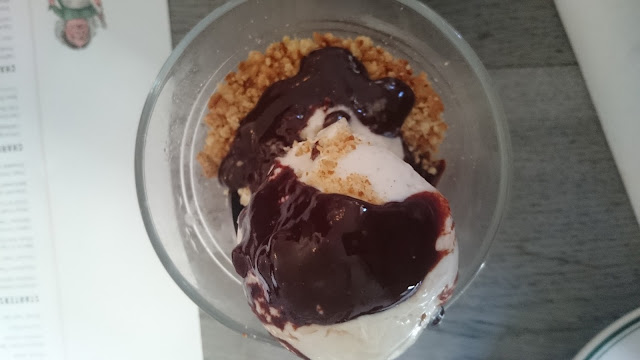 What Rosie and her team have achieved is a fun, imaginative and well balanced menu where the ingredients speak for themselves. A clever, unpretentious combination of flavours create an explosion of the taste buds with every mouthful of their fantastic creations. Cambridge people if you've never been it's really time you did. Everyone else - this place deserves a trip of it's own!