The Hole In The Wall, Little Wilbraham Cambridgeshire

May 16, 2015
I can't remember the last time I enjoyed a Sunday lunch as much as I did last weekend. In fact the husband reminded me that it was most probably the last time we were at the first Michelin starred pub the Harwood Arms in Fulham (which if you haven't been to it is definitely worth the trek to South West London). 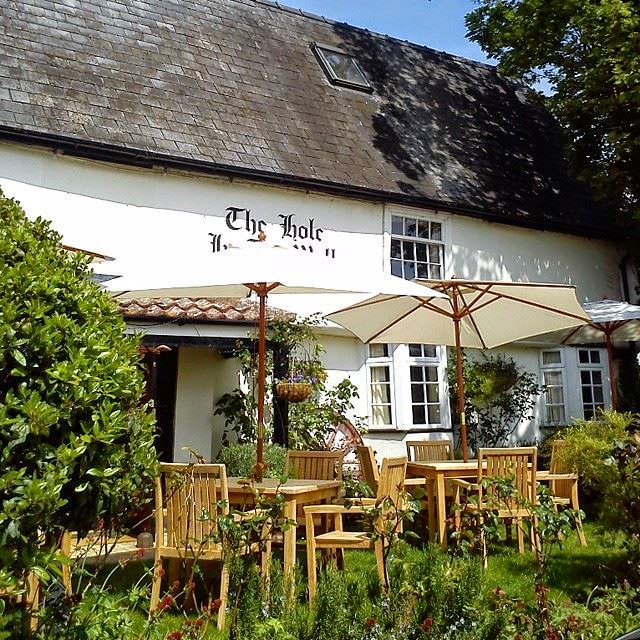 The husband and I were celebrating a whole seven years of marriage, an achievement! Determined after several failed attempts to book a table at The Hole in the Wall he took no chances and booked in March immediately following the most disastrous Mother's Day lunch at the Black Bull in Balsham (don't ever be tempted to go there and just think burnt potatoes that you couldn't even stick a fork in and 'creme anglaise' that tasted of custard powder). 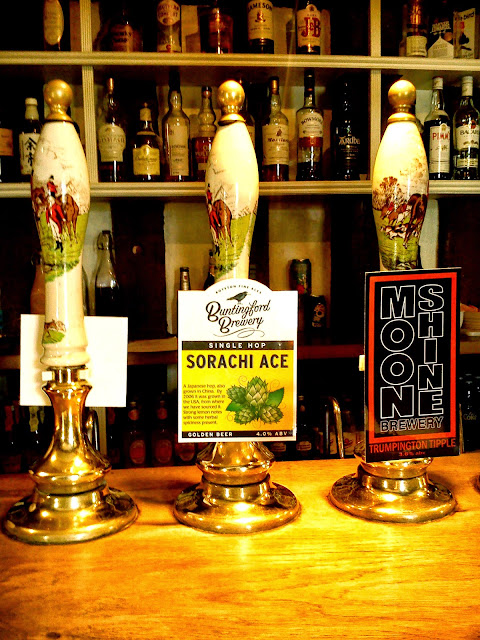 Thankfully our faith was restored, don't think we'll be needing to drive to London for a roast as I threatened to do post Black Bull debacle. The Hole in the Wall is the brainchild of Masterchef finalist Alex Rushmer and his university buddy Ben Maude. After spending their time at Cambridge University dreaming of owning their own restaurant, then both left to pursue different careers until Masterchef. I've never been so grateful to Masterchef up until now. What they have achieved here is Michelin starred cuisine at local pub prices in a picturesque freehouse, which seems inconceivable but by jove they manage it.

The Sunday menu is short and seemingly simple. The choice is two courses for £25 or three for £30 but what they don't tell you about is the compplimetary freshly made herb balls with a courgette dipping sauce to start or the delicious fresh bread brought to the table with the creamiest salted butter. To finish guests are offered  their piece de resistence  -the ale truffles. The platter was left on the table and I'm sorry I had two of these melt in the mouth heavenly treats.

Back to the food, I started with Gravadlax followed by juiciest Roast Loin of pork with possibly the best crackling I've ever had. the sweet cider gravy with a tart homemade apple sauce complimented the meat beautifully. The potatoes were to die for, roasted in duck fat served alongside perfectly al dente vegetables. The husband's Rabbit and bacon terrine, he said was the best he's had and his lamb was tender, cooked to perfection. 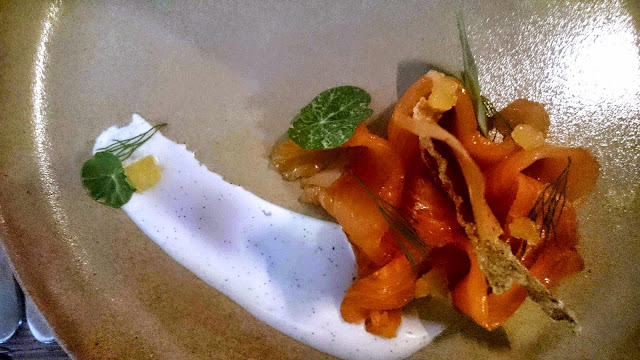 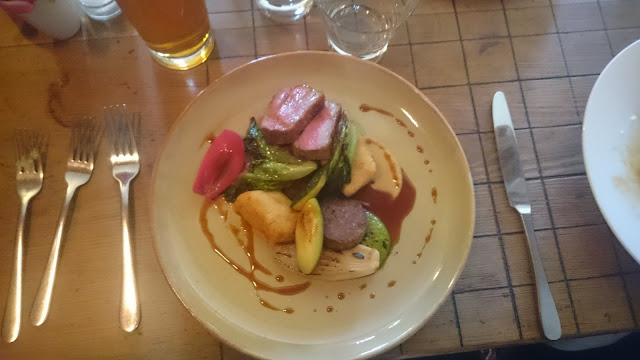 There is no children's menu as such but the Chef did roast chicken for the youngsters in the room, and children are more than welcome here. Matilda then proceeded to devour a large plate of food, a rarity I must say so it definitely passed her test. 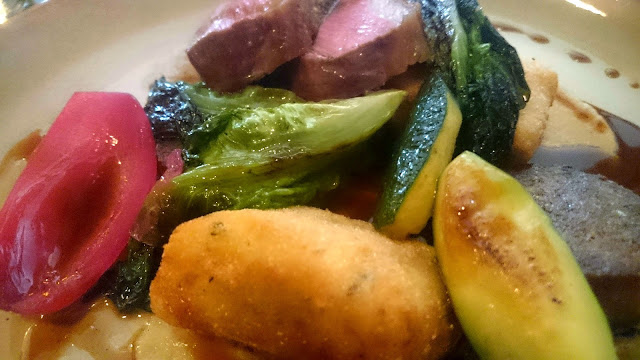 Onto puddings as they also are worthy of an illustrious mention. My lemon millefeuille was exquisite, light and crispy filled with a lemony cream accompanied by a lovely tart lemon ice cream and lemon jelly. It was so beautiful I was reluctant to dig in but needs must. I wasn't disappointed as the melange of textures melted in the mouth (I'm sounding a little Nigellaesque here but it's genuine I assure you!). Matilda and the husband opted for the freshly made donuts with salted caramel sauce and vanilla ice cream which they both gobbled up in no time so I could only take their word for it. In fact we were given a little goodie bag of donuts by the Chef as we were the last customers in the pub so they were going spare. I took a bite of one the following day which was still fresh and crispy like a good donut should be. 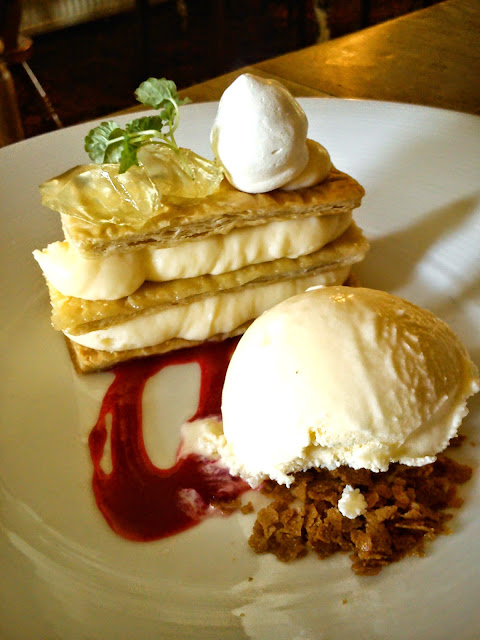 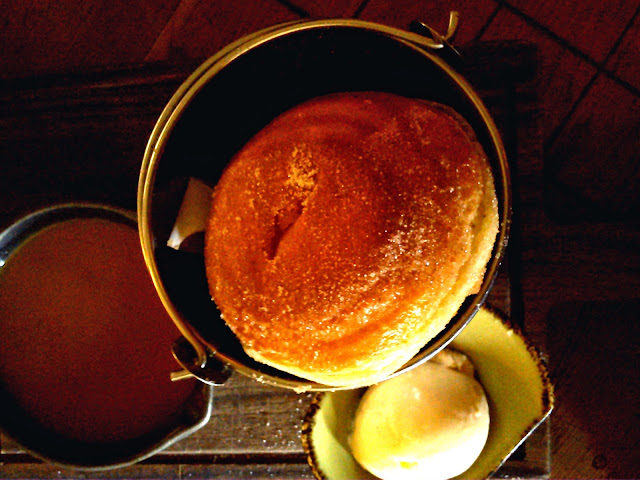 If you are local to Cambridge I urge to book a table and judge for yourselves what a wonderful job Alex and all his staff are doing. The service was welcoming, attentive and warm yet unobtrusive. Nothing was too much trouble including keeping Matilda entertained. The Hole in the Wall clearly strive to give their customers an all round first class experience from the moment they cross the threshold, which they undoubtedly achieve. Extraordinarily good value for money to boot.

If you're a little further afield I would say this is worth a trip to, just make sure you book way in advance as they are always full especially for Sunday Lunch as they've been runners up in the Food Observer awards. I'm hedging my bets they win next time, it'd be very well deserved! As for me I'm already thinking about booking my next trip. Can't say fairer than that.