Feast at the Young Vic

February 09, 2013
Prepare to be dazzled, moved and whisked on a beautiful yet moving journey through time and the continents. Feast is a veritable explosion of theatricality. 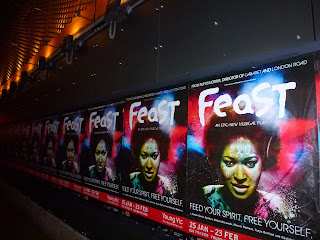 A collaboration between the Royal Court and the Young Vic with the rather vibrant director Rufus Norris and five playwrights. Taking as it's backbone the Yoruba culture whilst illustrating how these magical traditions full of symbols, illusion and faith were carried throughout the world by the slave trade and how it is still relevant today.

We are taken on a potted history of black culture from the abolition of slavery in Brazil to Cuba to New York to the London Olympics. The company were nothing short of amazing all round performers. Visually the show was breathtaking, I loved the use of film in particular the slave trade scene when thousands of names were projected on the metal curtains. An especially spine chilling scene which moved me to tears took place between a Brazilian slave owner and his female slave during the abolition of slavery. Terrified by the freedom she was being forced to accept, she pleaded with him not to go, imploring him not to forget she had been his wet nurse. His Father had sold off this woman's children so she could feed his son. She felt protected from the impending dangers of the world outside this house. How would this old lady survive with no family? Where would she live? Where would she work? The fear of the unknown can be so overwhelming, better the devil you know.

A challenging production with so many interweaving strands and contributors this is an ambitious project, which could have so easily not worked. However, it tells the story clearly, concisely with tremendous passion and energy. A fascinating journey through black culture, it's origins in Yoruba and it's far reaching influence in all our lives. Please do go see this remarkable production, on until the 23rd of February.