November 27, 2012
I've never made Christmas Pudding. Strange I know, considering how I do love to make everything from scratch. As my trip to Berkshire was cancelled and I'd got my work done by 3pm (perils of being awake super early before the toddler), I thought I'd turn my hand to the supporting dish of the big day itself.

A couple of months ago my dear old University friend Karola, she of the fantastically invaluable App London thru Cafes (listed by the Sunday Times as one of the top apps to have), put up on Facebook that the making of her Christmas Pudding was underway. Intrigued, I messaged her straight away, as a fellow home baker and keen cook, to find out who's recipe she was using. 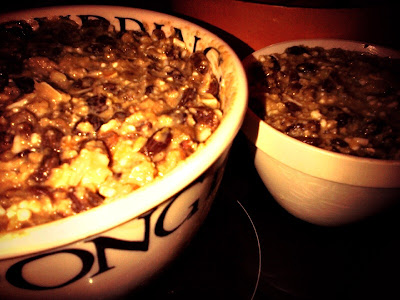 Hugh Fearnley Whittingstall's Mother's recipe no less, adapted from Rosemary Hume. Really very simple to make with straightforward instructions, this takes no time at all to assemble. Matilda helped me and, thoroughly enjoyed the stirring though some of it did end up flung across the room as the stirring became tougher. It took us all of twenty minutes to prepare. It's now bubbling away until about 11pm when I'll return to childhood like an excited little girl to take a sneaky peek as I sprinkle them with the magical ingredient: brandy. Nearly time. 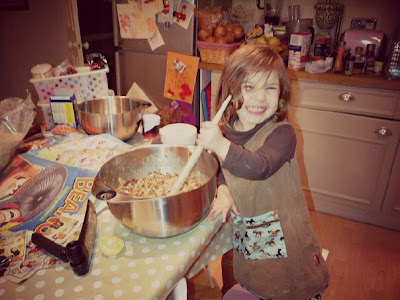