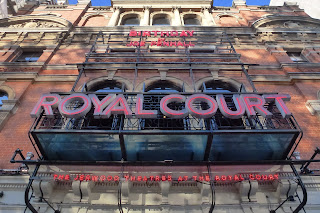 So last Thursday evening I was invited by my former client David Ajala to see him in The Witness at the Royal Court. David was one of my boys when I was a theatrical agent. I spotted him in a seminar I had held at the Court Theatre Training Company, I knew immediately then he had something and I hadn't even seen him act. I then saw him in a production and that was it, I knew had to be his agent.

Not only is David one of the best young actors in the UK he is one of the gentlest, nicest guys you could ever hope to meet. I felt like a proud Mum seeing her offspring excel themselves last week. It was quite often how I felt with a number of the actors when they finally realised their dreams of appearing on the National stage or at the RSC Stratford or here at the Royal Court. It is an actors ultimate goal to appear on one of the main stages in London and such an achievement, as these theatres really do have the pick of the crop.

The play was written by Vivienne Franzmann of Mogadishu fame, it centres around a Photojournalist Joseph who whilst taking the ultimate shot in Rwanda, rescued a young baby girl consequently adopting her. We meet the family when Alex (the young girl) returns home from her first year at Cambridge University. She begins to question her identity and her place in this very white middle class environment where she no longer feels she can relate to.  These feelings of confusion drive her to want to discover her homeland, her people and during this time of self doubt, both father and daughter's lives are turned upside down by a visitor from Rwanda. Life will never be the same again.

The play is concise, sensitively written and incredibly moving, I defy anyone to keep a dry eye during one of the speeches given by the visitor in the second act. The play not only questions identity and heritage but also the code of ethics amongst photojournalists. Will photographers go to any lengths including breaking all human morals to get that photo that will make them famous, or to highlight the cause most effectively to the rest of the world?

The three actors were sensational, Danny Webb as the reclusive broken Photographer, Pippa Bennett-Warner as the confused lost Alex, and David as the powerful Visitor whose arrival takes the play onto a whole other level by exposing Joseph's deepest darkest secrets.

It was two hours of theatre as it should be; informative, confrontational and thought provoking. It's a shame the run ended last night otherwise I would have said go rush down to Sloane Square and see this important piece of theatre. Mind you, you can never go wrong with a play at the Court so check out the exciting shows coming up soon. Book early as they do tend to sell out pretty quickly, I'll be booking for the new Caryl Churchill play. 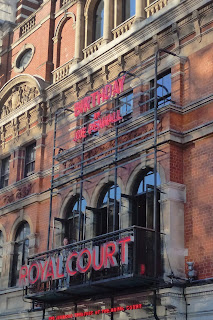