July 19, 2012
On Tuesday night my friend and I set off with a spring in our step, in the direction of Hyde Park to relive our youth with Madonna. Hordes of people surrounded Marble Arch and it's environs from 6pm, some were dressed up in the early 80's Like a virgin get up others in festival chic, the British spirit prevailed last night against the weather odds. 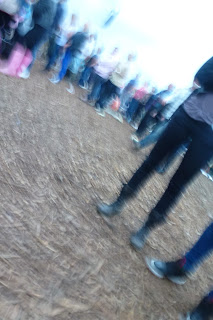 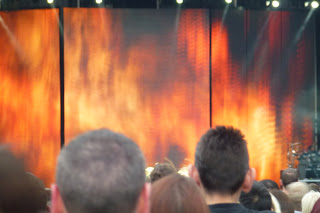 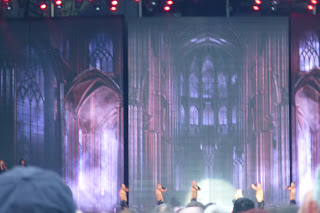 I have mixed feelings about seeing gigs in the open air especially when the sound has been clearly turned down to appease the local residents. The show started rather abruptly at 8.40pm and lasted for two hours. And what a show, Madonna is the ultimate showgirl, there are many imitators but she really, still at her ripe old age, beats them all into the corner. Scenario after scenario filled both the stage and the screens behind it, her message about world peace and acceptance of others despite their colour, creed or sexual orientation was made perfectly clear. 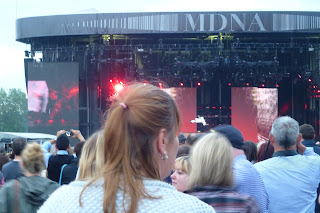 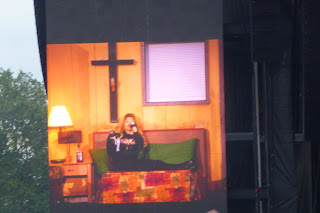 I've always admired the way she does use her celebrity to highlight society's ills and denounce them. She is not afraid to speak her mind, often encountering a great deal of criticism along the way though this has never deterred her from pushing democracy and free speech to it's limits of acceptance. And this show was no exception, we were treated to guns, blood splattered screens, crosses, a lot of swearing and Madonna's bottom amongst much other imagery.

You may not agree with her but you certainly can't ignore her. 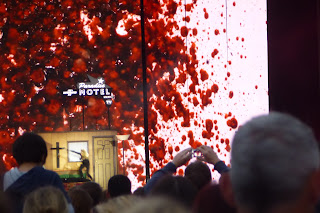 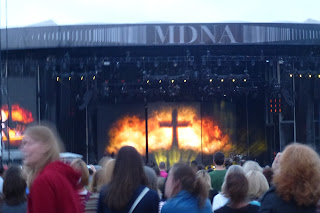 I'm not a particular fan of her latter work and sadly this is what she focused on which is completely understandable, she was here to promote her last album. I, like most of the audience last night would rather have heard her old hits. Like A Prayer, the penultimate song, brought the house down, every single person in that audience sang their hearts out. I wish she'd stick to what she used to do best! Her torch song version of Like A Virgin just didn't work, I just kept waiting for her to erupt into the original version alas that was not to happen. As we all know she hasn't got the greatest voice in the world, Madonna is all about the performance and that you cannot fault. So quite frankly her voice just isn't strong enough to deliver a solo torch song, she can writhe around the stage all she wants but the strength and power is simply not present in her voice. 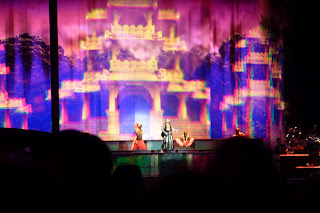 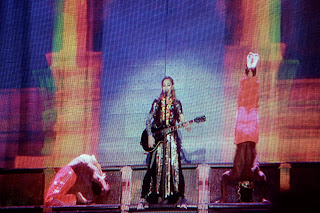 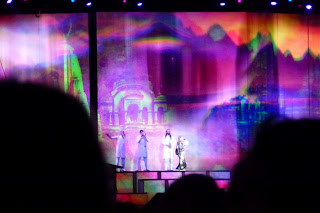 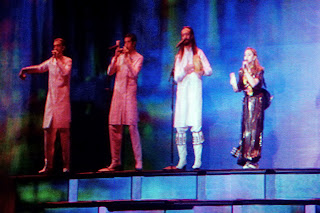 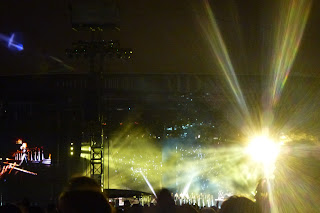 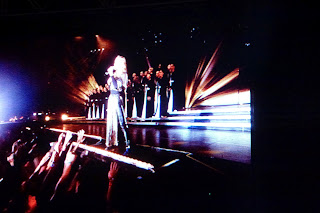 Nevertheless, she does give an incredible and awe inspiring performance. Despite her years, she is still an amazingly fit dancer, she looks fantastic though there is not much to her these days, she's all skin, muscle and bone. But, I wouldn't mind being in the same kind of shape as her that's for sure!