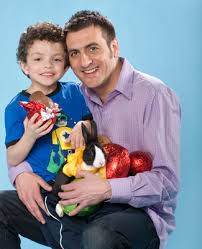 Last night's Corrie sparked off quite an intense debate in my house after the gut wrenching scenes of Little Simon being handed over to his Stepmother Leanne. By his Father.

As a Mother I couldn't even begin to understand how Peter could bring himself to give up his son. Okay so he's buggered up left, right and centre: cheating on his wife, resorting to alcohol, admitting to a murder he hadn't committed but now handing over his son to his ex wife who's not the boy's real mother, who I hasten to add lives in a room above a pub along with 4 other people and, who has no job to speak of. Little Simon wants to live with Leanne, he resents his Father's new girlfriend, so he finds a hidden bottle of wine. He drinks it ending up in hospital with his Father finally relenting to his wishes. Soap land suspension of belief aside I really can't imagine ever allowing my daughter to influence such a decision at that young age.

I would fight tooth and nail for her. I know I can be accused of having too much of a simplistic view on this. Peter probably realised he actually wasn't in the best place to be able to look after his son, and that being with Leanne would make his son happy. But how is this boy going to think of his Father when he grows up? His real dad gave him up to his Step Mum. His real dad didn't love him enough to fight for him. Isn't that how he'll look back at it? Or will he be thankful to his father for having given him a better stab at life?

It must be the most devastating decision to have to make. To allow your child to go because it's what you think is best for them. I cannot imagine my life to be worth living without my daughter in it, it senses shivers down my spine simply thinking about it. The bond between a Mother and Child is said to be greater than that of a Father's since they have carried and given birth to the child. Which perhaps why the decision was slightly easier for Peter? I understand that there are parents that are unable, for reasons sometimes beyond their control, to look after their children. My heart goes out to them as it must be an impossible situation.

This storyline has been going round and round in my mind, as I found it so heartbreaking for all parties. Part of me understands why he did it but the other is angry with him for not fighting for his own son. He's the only direct blood relative that little boy has and he's let him go. Oh but on the other hand the guilt must be tearing him apart.

I know, I know I must get myself together, it's only a soap. But that's what good drama is all about, to provoke discussion and question life. And boy has that episode succeeded in doing that.