I was extremely pleased to hear that one of my favourite actresses, Helena Bonham Carter had received a CBE yesterday. She's always been of huge inspiration to me, I love her quirky style and her drive as an actress. Her remarkable ability to cross genres and her transformation from corset drama to roles such as Marla in Fight Club. Her versatility as an actress was finally demonstrated and Directors finally acknowledged that wasn't just a classical period drama actress. Having said that, I freely admit that A Room With A View is one of my all time favourite films, always a sucker for a Costume drama this is right up my street: period, romantic, set in Florence oh it is blissful film. She was the darling of the glorious Merchant Ivory films, but it's been great to see her development as an actress whilst taking on challenging roles. 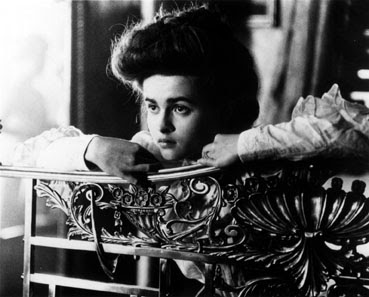 I've always admired her eccentricity both in her personality and her inimitable style, to me she is the epitome of Britishness.  Yesterday was no exception as she collected her CBE in a most fabulous Tartan suit that looked like a Vivien Westwood creation, with a black top hat perched on the top of her birds nest hair. She looked amazing posing with Tim Burton, who I do find strangely attractive. It's wonderful to see the well deserved recognition she is receiving for her unique talent and, contribution to British film. Last year a BAFTA this year a CBE, fantastic!