February 01, 2012
When it's this cold, grey and dreary I like to return to sunnier climes (in my mind of course). As you all know last year I celebrated my 40th Birthday in Brazil. We had the best holiday ever and still cherish memories of the place every single day. So in this bitterly cold snap, I turn to the warming luscious food we ate. It was simply some of the freshest, delicately tasting food I've ever had. Because we were on the coast the dishes revolved mostly around fish and sea food. From plentiful prawns, langoustines to lobster to some unidentifiable large fish, it all tasted as if it had just come out of the sea and found it's way immediately onto our plates.


Below are some different versions of Moqueca de Peixe 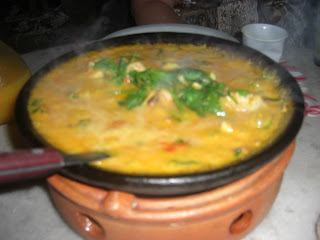 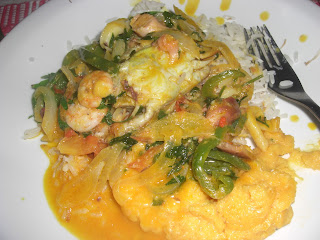 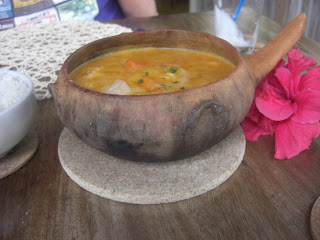 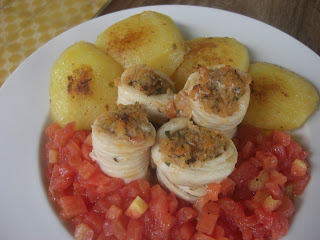 At Praia Do Patacho, the lovely Maria Helena and Juliana cooked for us mostly using the same ingredients which were the juiciest limes (you just can't get them here), garlic, coriander, a little oil, peppers, a lot of salt but hey we were on holiday,  smothering the fish or lobsters in this tasty combination. Then they'd pop it in the oven whilst the rice boiled and green salad was prepared, again dressed in lime, salt and oil. These dishes were heavenly to us as we simply can't get that sort of quality fish in London.

Here is the wonderful Maria Helena preparing the coconut milk! Not like the tinned stuff that ends up in our currys in the UK. I'm campaigning for her family recipe book to be compiled and published worldwide. 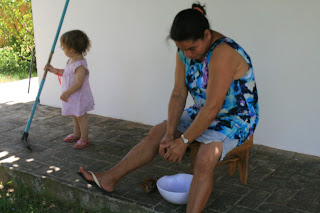 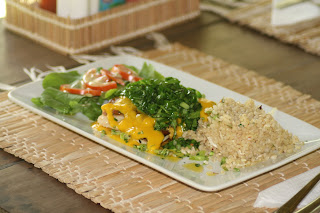 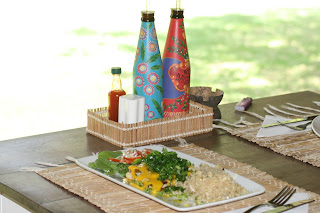 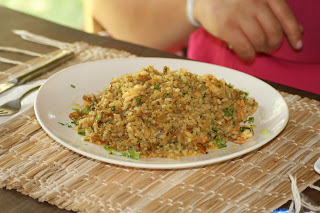 Whilst in Salvador we ate probably one of the most well known Bahian dishes Moqueca de Peixe which is basically a Mixed Fish/Seafood stew in a sweet coconut milk and palm oil sauce served with Farofa (manioc meal), fried plantain and rice. It is pure heaven, we indulged several times over the course of the holiday. Another famous Brazilian dish is the Feijoada which I wrote about here it is a heavy rich dish mostly eaten at lunch time, a true meat fest! We also ate beef a number of times and in particular the cut known as Picanha, so incredibly succulent and tender. Brazilians are big meat eaters especially beef and there are a lot of cows roaming all over the countryside. In fact there are a number of TV channels dedicated to cattle auctions which was quite extraordinary. 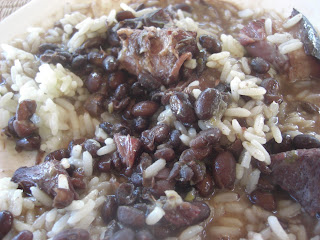 Here's Matilda tucking into homemade Feijoada made by Maria Helena, naughty but oh so nice! 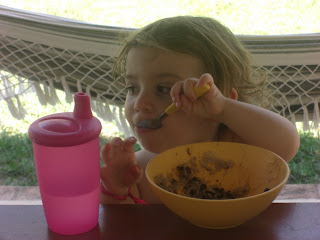 One of the things I tried that I'd never eaten before was Cassava, it is boiled up then fried like chips. It's a cross between a potato and parsnip and I became rather addicted to it! Fruit is absolutely divine in Brazil, there's all sorts of small berries that I'd never heard of some rather bitter but add a little sugar and they tasted so good. The Papayas, mangoes and watermelons were as sweet as anything and don't get me started on the pineapples. We drank plenty of coconut juice too, freshly cut from the trees in the garden at Casa Olivia.

Brazilian food isn't especially spicy or complex, local ingredients are used to their full potential and because they are so fresh there is no need to over dress. There are recognisable influences in many dishes, the most obvious being Portuguese and African. However the Brazilians have made it their own also using many indigenous fruits some we recognise but mostly not. I for one cannot wait to savour those tastes once again.