January 26, 2012
Interestingly I was only yesterday morning singing Matilda's praises to my Mother, how she wasn't a terribly difficult child, that she could happily play independently for ages, she doesn't tend to interfere with what isn't hers, is quite happy to share her toys when her little friends come over...then the tantrum struck at 5pm which lasted nearly til her father came home at 6.30pm.

She has had her fair share of strops as she is quite a spirited child with bags of energy and curiosity but this was like a demon has possessed her. Physically she even looked different, it was actually quite frightening to watch her as this inordinate amount of strength oozed out of every pore to the extent that I couldn't even pick her up to give her a reassuring cuddle. So I just left her to it watching from afar.


Advice on how to handle these temper tantrums varies enormously but to me it does make sense to just sit tight, be there in the background until their frustrations have poured out. It's all too tempting to try and entice them out of these by giving them something they like such as a biscuit or a bit of Cbeebies, but in all honesty I do believe they simply need to work through it in their own way. It's seems to work for us. Also whatever she was experiencing clearly frightened her too, because all she wanted afterwards was a huge comforting Mummy cuddle, and I for one could not argue with that.


Calm after the storm like butter wouldn't melt (but check out the crazy hair)! 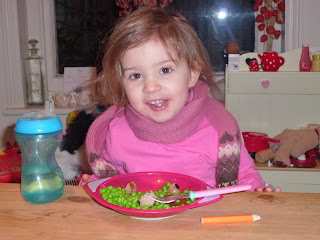