Sadly I have no Grandparents left. I never met my Mother's parents, but by all accounts despite their extreme poverty, were loving and self sacrificing, often not eating themselves in order to feed their own children and grandchildren. I wish I'd been able to meet them.

My Paternal Grandparents I did meet. Though my Grandmother passed away when I was 11, I remember her very clearly. She was a glamorous Lady. She couldn't read or write but she never let on, running her own business and being a great Patron of the Arts. Her best friend was the local courtesan and she was obsessed with Fashion, she would get all the latest Parisian fashions made up by the town Seamstress. She was a  strong, fiercely independent, intelligent woman who gave birth to at least 10 children, no one knows for sure. Yet she ran her business and still found time to keep herself well groomed, nails always painted and hair immaculately in a bun.

I didn't spend enough time with her, obviously difficult with me being in London and her in rural Portugal. I regret not knowing her in her heyday, unfortunately by the time I came along the Alzheimer's that eventually took over had begun to set in. My Grandfather, on the other hand lived to the ripe old age of 94 he survived for another 20 odd years after death in 1981. He was quite a character full of family tales but quite a stubborn old man, we didn't always see eye to eye but I found myself missing him deeply when he finally went to sleep that day and never woke up. He went very peacefully, as if he'd decided that it was time to join Maria Do Anjo and, leave this earth.

My parents are now in their mid 80's so Matilda has to make the most of the time she has with her Grandparents. She adores them thankfully, two peas in a pod my mother and her. When they are together they are inseparable, I see the patience my mother has with Matilda that she never had with me as her life was so hectic, and it is lovely! When they call the only person they really want to hear is their Grand daughter, luckily Matilda obliges and says 'allo bobo' which melts their little hearts over in Portugal. My father in particular doesn't even ask after me now, he immediately demands to know where Matilda is. Just wish they were a little closer and not a plane journey away. I can't bear to think of the day I receive the phone call that one of them has gone, so until then we will make the most of every day we have with them.


My Mum and Dad on their 60th Wedding Anniversary 1st March 2011 at Bumpkin, Notting Hill. 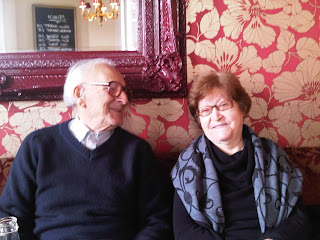 Matilda on her way back from the Beach with Grandpa 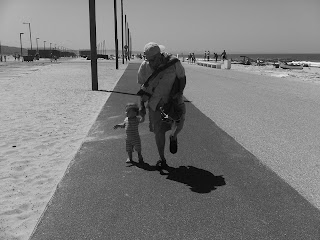 Having a cuddle with Grandma 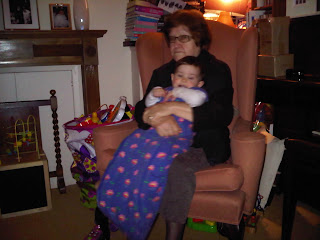