The best comfort food is...

August 04, 2011
Fish and chips! So with this rather drizzly, grey weather the husband and I decided to treat ourselves to that British classic, known across the world, fish and chips! Since our local chippie closed its doors we've been hard pushed to find a decent one, so we decided to try the relative newcomer Kerbisher & Malt near Brook Green.


This dish that dates from around 1858, became a staple working class meal because of the escalation of fish trawlers and the development of the railways making transportation to areas not near the sea all the more easy. The first fish and chip shop was opened in London's East End in 1860 by the Eastern European Joseph Malin, he now has a blue plaque in Bow commemorating his contribution to the British cuisine. With over 11,000 fish and chip shops in the UK today, it's hard to imagine a world without a chippie, somewhere you can always get a bite to eat after a late night out or before a football match, one of the best hangover cures I know. 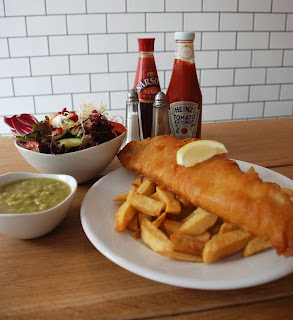 We'd both read some great reviews and with an owner/chef that trained at the Oxo Tower and Racine it was a no brainer, not quite a local but close enough in the car. So off I went down the dreaded Fulham Palace Road, round the Hammersmith roundabout to the delightful enclave of Brook Green. 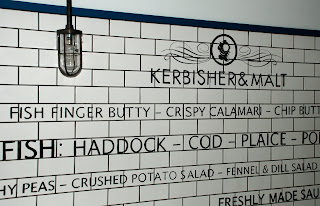 The fist thing I noticed was the distinct lack of greasy oily smell when I walked in, instead the aroma of tartare sauce permeated the air, quite a change. Neither of us particularly like greasy battered fish so we went for a Fishcake burger and Calamari with chips which we shared. The restaurant itself is small, bright and fresh with a lovely clean interior walls decked out in white brick tiles with great black and white photos. 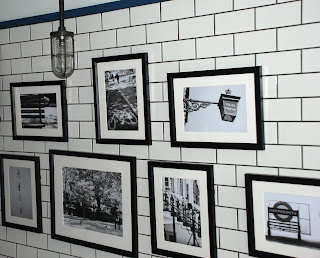 I was greeted by a warm friendly waitress obviously picked for her gorgeous looks and her charming manner. The food was handed over in environmentally friendly boxes rather than the standard paper bags, so it seems that every detail is taken care of here including a warning to eat your food as fast as possible so it remains crispy. So I drove home like a lunatic breaking every speed limit! I always do as I am told!
It was gorgeous, restaurant food at chippie prices. The lightly fried Calamari was perfectly seasoned on a bed of fresh salad, the fish cake was quite substantial and extremely tasty. The twice cooked chips were definitely homemade, with no trace of cheap dirty oil or sogginess. This is high quality, well sourced food, that is handmade, nothing is frozen just like I want my food to be. I also like the fact you can also have your fish grilled, we'll definitely be trying that next time alongside the fennel and dill salad accompanied by those heavenly chips.

If you're a local get yourself down there now and even if you're not, it's worth making the trip. And if you're wondering about the name Kerbisher its the name of an old Norfolk fishing boat and obviously Malt is the vinegar!