Yoko Ono at the Serpentine

August 29, 2012
The weather on bank holiday Monday was just a touch volatile in London, so after our mad experience on the M11 last Saturday where I thought the hailstones would smash the car, we decided to stay closer to home. Realising we had only a couple of weeks left to see the Yoko Ono exhibition we jumped in the car during a dry spell up to The Serpentine. 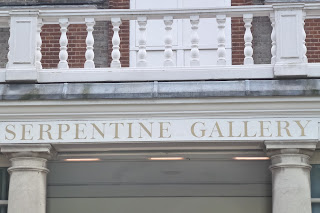 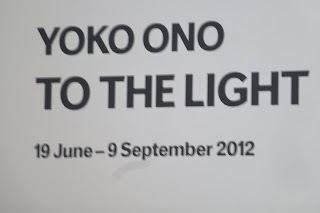 The Serpentine is one of my favourite galleries, it's setting is beautiful. Nestled in a rather special corner of Hyde Park, opposite the lake itself. Known for it's patronage of contemporary and modern art it is the perfect backdrop to the work of Yoko Ono. Overshadowed somewhat by her relationship with John Lennon, Yoko is one of the most important pioneers of conceptual art. Peace, respect of nature that surrounds us and love are the recurrent themes in her work. Despite the seriousness of the messages to her audience, I discovered a genuine sense of humour. My favourite piece was the acrylic and steel maze, the husband took Matilda round it and there was a lot of bopping of noses and heads that resonated through the room. Needless to say they and the other bystanders were highly amused as the husband not only tried to navigate his way out but keep Matilda from bumping her head too much. the other piece was the step ladder leading up to the sky with a magnifying glass hanging above, over which Yoko and John met in 1966 at an exhibition of Avant Garde art. The original idea was for people to climb up and read the very faint word 'breathe' but sadly health and safety regulations today has put the kibosh on that. Another remarkably moving piece are the Three mounds of earth named country A, B and B are displayed in front of the War is over poster she made with John Lennon. Make love not war is very much the name of the game in this exhibition from the World War Two helmets filled with pieces of jigsaw puzzles that apparently people are meant to take away to create a blue sky, to the wishing trees outside the entrance where you can write a wish and tie it to the trees floating in the wind. I found the live footage of the skies above the Serpentine rather mesmerising too, I could have sat there for hours watching the clouds go by. Her poems are dotted around the walls of the gallery giving a true insight into her philosophy and her etat d'esprit. 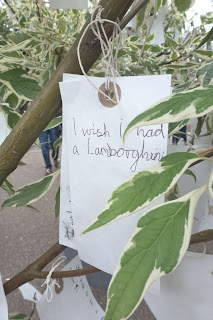 (kind of defeats the object of this installation!) 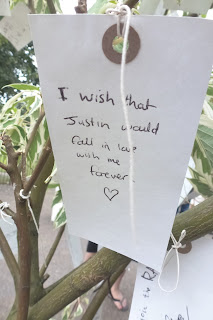 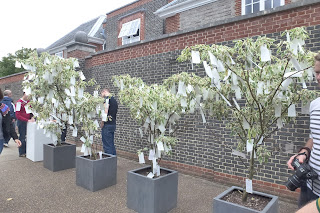 It is a shame one is not allowed to interact a little more with some of the work, the attendants are forever on your case especially if you've got children with you and a camera. By all accounts we were lucky there was no one around the chess game outside, otherwise Matilda and the other children wouldn't have been able to enjoy it as much as they did. I'm a firm believer that this sort of work needs audience participation in order to fully grasp the concept and enjoy it, tis a pity that health and safety has gone mad and so often over rule an artist. I remember back in the day when I was in my early 20's going to see a Robert Wilson installation in an underground tunnel where there was absolutely no lighting except for a few candles and you had to feel your way round whilst bumping into walls and tripping over cables. That was half the fun! 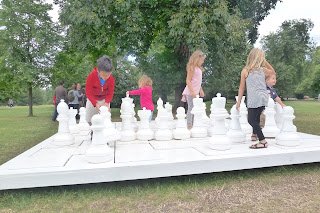 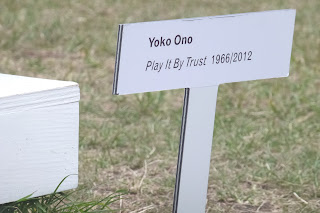 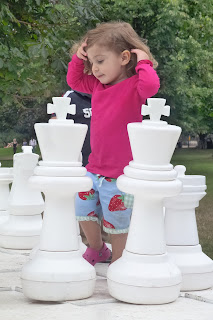 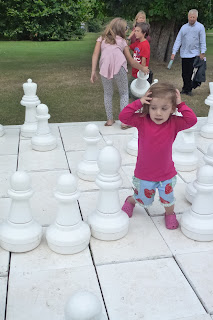 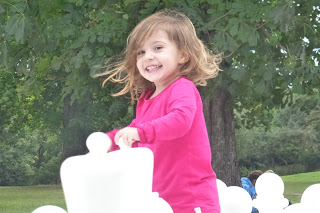 If you get the chance it is definitely worth exploring Yoko Ono's To The Light at the Serpentine. It was such a treat and privilege to see such an important collection of her work . It runs until the 9th September 10-6pm.