Cecil Beaton at the V&A Whenever I have shopping to do in Knightsbridge for clients I always use it as an excuse to pop into the V&A, one of my favourite museums. I had such a morning last week, so took Matilda with me as it was a perfectly beautiful hot day. We mooched around Sloane Street, picked up a couple of presents for the wife of a client then wandered down the Old Brompton Road.

It was busy at the V&A that day because of the NUT strike though that made it all the more fun for Matilda as she got herself completely drenched in the gardens at the back by the lovely cafe. So whilst Mummy enjoyed her well earned Latte, the two year old splashed around in the water chasing after the bigger girls. Then off we went to see the Cecil Beaton exhibition in my attempt to enter into the Diamond Jubilee spirit. 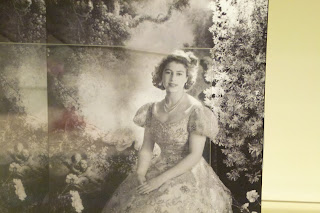 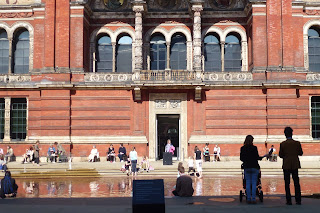 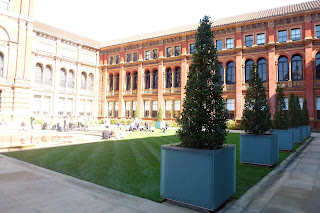 I've been keen to see the Cecil Beaton Royal portraits as I've always been fascinated by him. Born in 1904 in London, he was one of the original 'Bright Young Things', a famously hedonistic group of Aristocratic artists famous in the 1920's and 30's. The gang included the likes of Diana Mitford, Nancy Mitford, Rex Whistler, The Sitwells, Evelyn Waugh and Stephen Tennant. Fascinating, they lived fast and furious lives that continue to intrigue us today. Cecil Beaton hung out with the rich and famous and, was considered the greatest fashion and portrait photographer of the time.His private life was also of interest, openly gay he also had an affair with Greta Garbo which ended abruptly when his memoirs, including a large section detailing their relationship, were published. He worked mainly for the British and American Vogue photographing the aristocrats and stars of the time. He remains extraordinarily influential particularly noticeable in Mario Testino's work. For me his photographs are extremely feminine, romantic, beautifully composed like visual poetry. His background as a theatre designer was certainly prevalent in the theatricality of his photography.

The photographs displayed at the V&A show the Queen as a young, fresh, good humoured and beautiful young woman with her family. They show a warmth and approachability that is unusual for a monarchic, she clearly felt very comfortable in his presence. Though he did say himself that they had extremely different views that just came together in the end. As well as the photographic exhibition there is a screening room showing the footage from the Queen's coronation, what I found more interesting were the older ladies discussing where they were that day, the parties and all the fun they had. I would really recommend seeing this rather lovely exhibition though you'll have to hurry as it closes on the 22nd of April.