March 12, 2012
A client called me over the weekend requesting that I pick up a few things for them today. Despite not being the biggest fan of it, Westfield sadly has all the shops I needed to go into. Furthermore, I had Matilda with me today so it's certainly the easiest shopping destination. I'm only 10 minutes away in the car and as they've reinstated their £2.50 for 2 hours parking Monday-Friday, it's cheaper than getting the bus. I bundled Matilda into her car seat with the promise of going to a 'big shop' (she actually enjoys going to supermarkets). Don't know why but I thought I'd leave her bugaboo at home and take the scooter instead. BIG mistake.

It all started off rather well, she enjoyed the scooting in the carpark then into the lift and around the aisles but as soon as I entered the first shop, Zara, trouble began. By the time I'd reached The Village (I won't name any shops) my embarrassment at the severity of the tantrums rose to new higher levels. I must say everyone was incredibly sweet and patient as my daughter rolled around the floor, insisted on hiding under clothes rails, drove her scooter into the back of terribly manicured ladies that lunch and, screeched at the top of her voice. Golly, I've made her sound like a little monster!

Normally, she's a delightful, inquisitive, imaginative, interested little girl who gets terribly frustrated at not getting her own way or, coming to terms with the realisation that she still cannot do certain things. Both of these obstacles get the better of her good nature. Both her Daddy and I are continually amazed by her curiosity, her wonder at seeing simple things for the first time that we take for granted having inhabited this world for over 40 years. One such example took place yesterday whilst we were watching Dancing On Ice. Two of the dancers were dressed as clown which she'd never seen before so she proceed to shout and point at the television, giggling away exclaiming 'he's got red nose Mummy!' One forgets how exciting it is to see such a sight for the first time. She's had similar reactions to horses, giraffes and Police cars whizzing past flashing all it's lights and deafening siren. Perhaps, we should all take a moment each day to appreciate and ponder all that surrounds us as if we were a child once again.


Matilda with her I am not amused face on upon her return from Westfield! 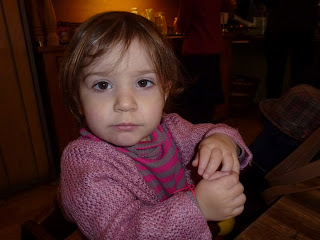