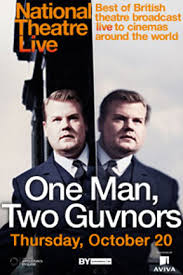 On occasion when there is much hype around a movie or a play, I find myself disappointed when I eventually get round to seeing it. Thankfully this was definitely not the case with One Man Two Guvnors, I don't remember the last time I laughed so heartily at the theatre. We were fortunate enough to be given tickets by very generous friends who sadly for them couldn't make it, so relinquished them to us.

Directed by the ever ingenius Nicholas Hytner, the play is an adaptation by Richard Bean of Goldoni's The Servant of Two Masters. Set in 1963 Brighton with James Corden at the healm of the cast the production demonstrates British farce at its best, Corden shines with his outstanding comedic skills. I remember seeing him in the original production of The History Boys at the National, he was amazing then but now having developed and perfected those skills his performance was a veritable Tour de Force. His physical comedy is simply breathtaking keeping you on the edge of your seats, the scene with the trunk is excruciatingly funny, and he deals with the audience participation magnificently. It is a remarkable skill to be able to react completely off the hoof, Corden has the audience in the palm of his hand throughout. Especially when on Saturday night he began corpsing uncontrollably after an audience member offered him a ham sandwich though he did ask if anyone there had anything to eat as he was hungry! There is also a show stopping performance from Tom Edden who has the audience in stitches and who well deserved the rapturous applause that ensued following his mishap. Daniel Rigby also surprised me with his perfectly timed mannerisms and portrayal of an Upper Class toff.

The story defies description as it moves at a million paces, but to summarise: a servant (Corden) finds himself working for two Guvnors. Driven by a desperate hunger he dots between the two culminating in the famous dinner scene where he serves them dinner simultaneously unbeknownst to them, whilst putting aside the bulk of the food for himself. Eventually after numerous mishaps it all comes good in the end.

The women give strong supporting performances, especially Jemima Rooper who we represented at Rossmore many moons ago.  Though the focus is much more on the male performers who are some of the best Comedic actors around. Comedy and farce even more, is actually a much more difficult side of performance, it's not that usual to find an actor with genuine funny bones. It always looks a lot easier than it is in reality.  I also must mention my old lovely client Polly Conway, a member of the ensemble who did a delightful little turn, she is a wonderful comedy actress and it pleased me enormously to see her appear, albeit briefly, on the Adelphi stage.

The pace and the laughs dipped a little in the second act, purely because the resolving of the stories is never quite as interesting as the setting up of them. Nevertheless, it didn't affect my enjoyment of the play. The band, led by the exceedingly talented Grant Olding also provided toe tapping original music during scene changes and, as an intro to each act which got us all jigging around in our seats.

The show is unashamedly 'Carry On...' with more than a hint of the music hall conventions. This traditional production is perfectly enhanced by the old fashioned painted sets, there is nothing modern or revolutionary about this show, which to be honest is actually rather refreshing, it's a good old school romp that leaves you with stomach pain from the endless verbal gags.

A triumph of British theatre, I wish the show and it's cast every success on Broadway. Just a word of warning though, avoid the two front rows of the stalls if you're not into audience participation!