My love of Colette Rossant

Over the Christmas break I caught up with a lot of blog reading and one in particular caught my eye by eatlikeagirl.com where she shared her 2011 book recommendations. Amongst the list were the memoirs of the Franco-Egyptian food writer/Cook Colette Rossant.

It was the second part in the trilogy set in 1940's/50's Paris that really grabbed my attention, Return To Paris. My love of Paris is no secret, and that Golden era has fascinated me since my teenage years where I'd often imagine myself hanging out in Cafe Flore with Sartre and De Beauvoir, living in an attic apartment overlooking La Seine in the Marais so I could paint all day, having affairs with Philosophers and Writers. Some things never change...

I confess I'd never heard of Colette Rossant but the fact she wrote about food and Paris seemed a winning combination for me. I was not wrong, they are amongst some of the most sumptiously written books I've ever read. Colette endured a tempestuous childhood, daughter of a typically distant French Mother and Egyptian father who died when she was 6. Colette was whisked to Egypt at a young age to help with her Father's illness however within months her father sadly died. She was left her with her Egyptian Grandparents and, equally importantly their cook, whilst her mother gallivanted about not seeing her for months and years. The Second World War being over her Mother reappeared to tear her away from her beloved Grandparents back to Paris to her cold, fierce French Grandmother and her brother who had stayed behind. From her teenage angst's, her relationship with her family, finally falling in love with an American, following him to Munich getting married at a very young age, moving to Italy then finally to her husband's home, New York, one is taken on a rollercoaster ride. The book describes the twists and turns of her life through by her passion and obsession with food. From walking through the Parisian markets to discovering a Middle Eastern shop in New York her life is told through food. Thankfully she also shares some of the recipes that have clearly marked her journey. One I'll be trying out will be the Chicken Fricasse which my Mother always cooked as I was growing up. 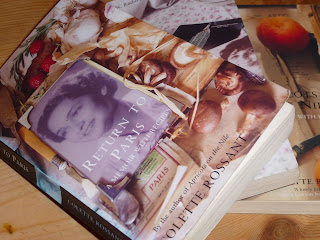 Despite her difficult life and remarkable lack of Motherly love Colette retains a warmth and optimism that runs throughout the book, her descriptions of food so vivid that one can almost taste and smell the food lift off the page. One can't help but share each emotion and live it with her. I'm half way through the last book Madeleines in Manhattan so I'll report back once I've finished.