September 06, 2011
Last Friday saw the last of my birthday celebrations with a group of my oldest friends that I've known for over 20 years. So where better than cool Clerkenwell for us ageing, yet still clutching on to our youth, ladies? My friend H suggested The Zetter Town House which was launched in March 2004 by Mark Sainsbury and Michael Benyan (of Moro fame). The 59 room hotel is set in a converted Victorian warehouse, being Eco conscious hoteliers they have used environmentally friendly materials and energy saving techniques. Their own water pump in the 1500 foot bore hole beneath the building now provides the bottled spring water and, runs the Air con!

As soon as I had a glance at the website I knew it was going to be my kind of place, dark corners, mountains of clutter, lots of leather armchairs, a spot of taxidermy basically Music Hall meets English Country Mansion House Glamour. I tried to book a table for 7.30pm, but be warned that they only have 6.30pm or 9.30pm sittings in the Bistrot Bruno Loubet. This sadly wasn't going to work for us Mummy's waiting for working Daddy's to come home and take over and, too late for the others coming straight from work. Bitterly disappointed, I thought that was going to be it for my Zetter experience. Thankfully no, they came back pretty much straight away to offer a Private room instead! I was over the moon with excitement! What amazing customer service, determined to make it work for a non celebrity customer who was completely unknown to them can be unheard of in establishments such as these, I was really impressed with their thoughtfulness.

So on the night we arrived, had a couple of glasses of wine in a discreet corner of the rather wonderfully designed entrance - a beautiful chandelier welcomes you in to reception with unique touches such as the two folded up bikes adorning a wall which simply tickled me. The Bistrot itself was buzzing, exuding a vibrant atmosphere. We were then led down a little later to our room with our very own waiter, which was as gorgeous as it looks in the photo above. 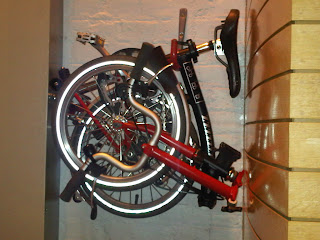 The Bistrot Bruno Loubet which opened in February 2010 is in the hotel building, the Zetter Town House that houses the cool Cocktail Bar, games room and 13 bedrooms is just across the picturesque Georgian square. Bruno Loubet was Head Chef at Le Manoir Aux Quat'Saisons before winning a Michelin star at the Four Seasons in London. He then set up his own London restaurants Bistrot Bruno and L'Odeon, but then went off to Brisbane for 8 years with his young family, returning heureusement to London in 2009.

Traditional regional bistrot dishes are given a twist through the clever amalgamation of classic and modern cooking. For example the blissful Summer Fish Cassoulet I chose, the more traditional Toulouse sausage and pork was replaced with an extraordinary light moussey sea food sausage, salt cod and salmon. Broad beans were added to the more traditional haricot beans which is a genius idea as both complement each other so well.  I, like a number of my friends, started with the Beetroot ravioli (bottom photo) was quite simply divine, sweet juicy delectable parcels of beetroot scrumptiousness. 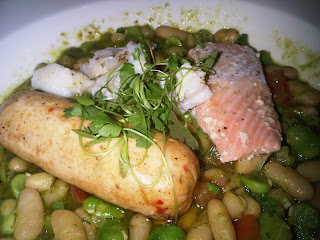 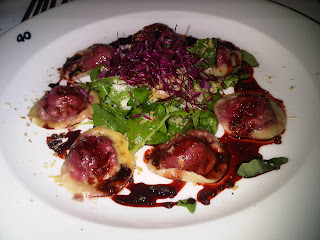 The salmon tartare again a twist on that French tartare classic  was a huge hit with a couple of friends, as well as, the perfectly cooked and tender rack of lamb with miso aubergine. 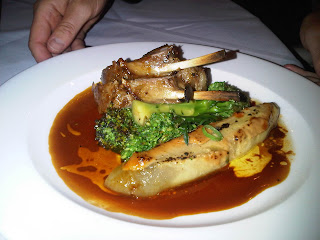 Pudding for me was the Chocolate Delice with a salted liquid fudge centre, which was like an explosion of the senses for me. You bite through the hard chocolate casing followed by a rich yet bizarrely light at the same time middle, oh it was heavenly. Sorry no photo as it disappeared pretty promptly I'm afraid.

I can safely say it's the most exciting food I've eaten in a long time. Carefully planned, beautifully presented with flavours that compliment each other in a captivating way. The new menus are being developed at the moment and will be launched soon.  I for one will be returning to try them out.

We finished off our dinner and waved goodbye to our charming young waiter who handled 10 tipsy ladies with aplomb. At reception they rang the Townhouse to make sure they had a small table waiting for us, nothing seemed too much trouble for the staff, perfectly attentive but not overbearing or stuffy as some tend to be.

We crossed the beautiful Dickensian square and entered the cocktail  lounge through an ordinary black door. Wow. Visually I was stunned. I loved everything about it. As you can see for yourself, it is filled with whimsical curios, objets d'art and opulent theatrical furniture that transport you back in time to the era of the Dandy.

The atmosphere was lively yet relaxed and loungey, if you want a little more action you can escape to the games room in the basement with it's full sized ping pong table as well flat screen TVs, Nintendo Wii's and other boys toys. The walls leading down the stairs are covered with the most fantastic collage of vintage advertising, posters, magazines, theatrical/cinematic memorabilia as you can see in the photo below. 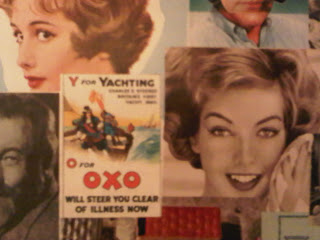 We stayed for a couple of Cocktails, which have been designed by Tony Conigliaro the creator of  The Twinkle and Smoked Old Fashioned. He took as his inspiration the history of Clerkenwell as a centre for breweries and Gin distilleries together with old recipes for tinctures, bitters and herbal remedies. I'd heard much about the Les Fleurs Du Mal cocktail from H which is named after the Poetry of one of my favourite writers Charles Baudelaire. I'm in no doubt that this certainly would have been the sort of a drinking den that Baudelaire would have approved of. It's easy to imagine the original 'Flaneur' himself, standing there at the bar with his pig in tow, having an absinthe touched cocktail. In fact the Parisian Nineteenth century seems to be quite influential here. That's what I loved about the Zetter, everything meticulously researched and thought out. Nothing has been left to chance, every decision is perfect as far as I'm concerned and I look forward to my next visit. Just wish it was a little closer to Fulham, any chance of opening in West London?